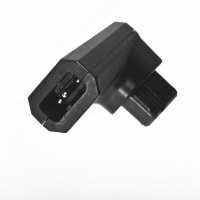 Here's how it works:

It's as simple as that!

Important: We advise that you do not plug or unplug your external power cord into the AC57 Adapter while the Speedlite is in the hot shoe of the AC7. By doing so, may cause some stress on your flash's power input jack.

Note: The 580EX and 580EX II out of the box have their pushbutton on the right side, when the head is ready to be angled forward. When used in the AC7, if you want to rotate the head away from the AC7, you'll have the button on the left side. Due to the position of the FlexTT5's antenna in relation to source of RF-noise in the flash, we can't make a cutout on the left for the button as we did on the right. The key to note is that the flashes don't actually lock at every point that the head can move to - they only lock at their full extension points, so in many situations you don't have to push the button to unlock it. While it would be handy to have a cutout on the left side as well, it would negate the much of the gains made by the RF shielding in the first place.