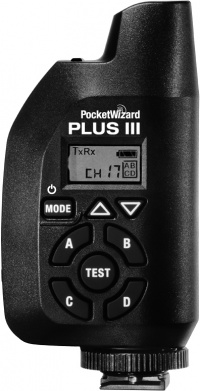 PocketWizard announced the E Release firmware upgrade on September 12, 2019 for the Plus III and Plus IV radios. Please see our PocketWizard E Release page for details. Operational differences between the 2 generations of firmware are noted below.

Some PocketWizard® radios, like the MiniTT1® or FlexTT5®, operate on Standard Channels as well as ControlTL® Channels. ControlTL Channels work with TTL or remote flash power control. The Plus III with Legacy firmware installed can work with any PocketWizard radio transmitting or receiving on Classic Channels, not ControlTL Channels. Plus IIIs that have been upgraded to the E Release can only work with other radios that have also been upgraded to E Release firmware.

When you first turn on the radio, you will see one bold green blink. Then the Plus III’s status LED will blink in three different colors: green, red and amber.